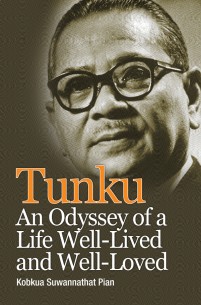 Tunku: An Odyssey of Life Well-Lived and Well-Loved

There is little doubt over the position of Tunku
Abdul Rahman in Malaysia’s history. Known as
the Father of Independence and also Father
of Malaysia, Tunku stands head and shoulders
above the other leaders of the country as evidenced
by the vast volumes of literature on the man and his
achievements.
Tunku: An Odyssey of a Life Well-Lived and Well-
Loved offers a comprehensive account of Tunku’s life,
both personal and political. It studies Tunku’s life from his
childhood, education and his eventful adulthood to his
political ups and downs, his struggles as a private citizen
and his enormous contributions to the nation, the Malays
and Islam.
Tunku: An Odyssey of a Life Well-Lived and Well-
Loved convincingly argues that, contrary to belief among
certain quarters, it is the Tunku who not only defended
but also installed the special position and privileges of the
Malays as a fundamental criteria in the formation of the
Federation of Malaya.
Besides his outstanding achievements in securing
Malaysia’s sovereignty and independence and the
formation of Malaysia, Tunku was also known to be
incorruptible which perhaps, has contributed to his being
poorer after he stepped down after nearly two decades at
the helm of the country.
Staying true to his own self and his socio-political
values in and out of office has gained him the love and
respect of a multiracial society who will always remember
this extraordinary man and much loved leader.