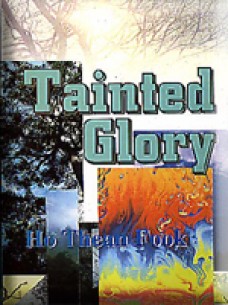 TAINTED GLORY is not merely a fiction but is a true story of bitter episode of life experienced by an ordinary Malaysian, Ho Thean Fook. The story begins from his childhood period at a small town, Papan In Perak. Hardship of life did not prevent him from pursuing education, which saw him being accepted as a school teacher.      When Malaya falls under Japanese Occupation, the Malayan Communists seize the situation to influence the people using nationalism and patriotism as means of garnering support. Many people, especially those living in rural areas joined the rebels, the author and his peers included. At first, theirs was an underground movement.      However, when the Japanese Kempeitai managed to discover their activity connection to the clinic owned by Dr. Sybil Kathigasu, they were exposed to danger and had become fugitives. Finally, they had to retreat to the jungle. Here, the author begins to experience the harshness of life, which includes facing enemies threat, internal bickering among the guerrillas and various other difficulties. The author felt of being caught between nationalism struggle and the objectives of establishing a communist country through arms struggle. He had to continue with the anti-Japanese guerrilla, as quitting will bring him to face a greater danger.      After the surrender of Japan, the British returned and called the guerrillas to end their struggle. Some of the rebels heeded the call, including the author, and later was drafted into Force 136 at Kedah. The author, feeling that he is being looked suspiciously, quits the force and returns to be civilian, and worked with government agency. That is following with a stint in a bank prior to his retirement.      This book should be read by all walks of life, since it is written based on true account of life. It is about an ordinary citizen whose intention of defending his country saw him being caught into the plans of other party. Not many books written to tell the story of living in the jungle to oppose Japanese Occupation and the real aims of the rebels.