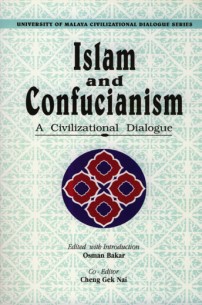 THE CONTENT of this book is comprised of a selection of papers that were originally presented at the historic International Seminar on Civilizational Dialogue between Islam and Confucianism, held at the University of Malaya, Kuala Lumpur on 13-15 March 1995. Written by a group of distinguished scholars of Islam and Confucianism, social activists, and ideologues of inter-religious and inter-civilizational dialogue, the book covers a wide range of topics related to the central theme of past an present encounters and interactions between Islam and Confucianism, and the future prospect of a more energetic and creative dialogue between the two religions and civilizations.  : : : Contributors include Anwar Ibrahim, Tu Weiming, William Chitick, Chandra Muzaffar, Wang Gungwu, Sachiko Murata, and Osman Bakar. As a whole, the book may serve as an invaluable introductory reading on similarities and differences between Islam and Confucianism, and on the meaning and significance of civilizational dialogue between them, not only for Muslim-Confucian relations in countries like Malaysia, Singapore, Indonesia, and China but also for the future of human civilization in the 21st century.