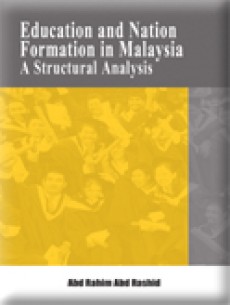 Education and Nation Formation in Malaysia: A Structural Analysis

Education and Nation Formation in Malaysia: A Structural Analysis is a study about how education in Malaysia before and after independent play a predominant role in reshaping the nation as well as transforming Malaysian society. It is a sociohistorical and sociological analysis of education in the context of changing society from British colonial legacy to Malaysianization policy, from ethnocentrism of race to nation building and vision 2020. The policy is to enhance Malaysian image into a fully developed nation and building future Malaysia destiny in achieving social justice, developing democratic society and fostering national unity. Education and Nation Formation in Malaysia: A Structural Analysis exploring critical issues such as poverty, underdevelopment, inequality, class struggle, social tension, cultural disharmony in Malaysian divided society. The uprising nationalism following race riot May, 1969 has led to the policy change of education incorporated with the national development policy aimed to redress race inequality. Instead of that the policy also encouaged economic growth and economic prosperity as essential prerequisite in generating and distributing wealth among race. The second broad prong of New Economic Policy (NEP) is restructuring society. This involved strategies to create 30 percent Malay ownership and participation in modern economic activities such as enterpreneurship, industries, business and so forth. Restructuring society also involve major changes in implementing policies such as social, economic, education and public services. Education and schooling in this context play a decisive role in combating poverty, social mobility, creating new professional elite, transforming social class and fostering modernization and social change.      In contrast and nevertherless, a structural analysis focuses on key pertinent issues of Malaysian divided society such as race division and segregation, cultural pluralism, class differences, gender issues, religion influence and secularism which has critical impact and sets a dominating trends in creating conflicting agenda in Malaysian colonial image society. In particular, education and nation formation in Malaysia: a structural analysis addressing key issues of citizenship education linking with teaching and learning in a broader perspectives of policies, politics, economy, democracy and as well as the role of Malaysia citizens in determines the direction of change in the era of post-independence.