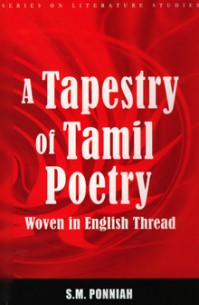 A Tapestry of Tamil Poetry Woven in English Thread

This book is an anthology of Tamil poetry in English translation. It is one of its kind at present. The poems translated in this book encompass a period of 2,000 years, that is from Sangam classics to poems of the 20th century. This book displays the rich variety, beauty and wisdom to be found in Tamil which remains a classical as well as modern language, belongs to the Dravidian family of languages. These Tamil poems attempt to depict the culture and civilization of South Asian people, that is their love and loyatlies, ideals and enthusiasms. Readers are indebted to Dr. S.M. Ponniah for his pioneer attempt to introduce Tamil poetry to the English-speaking world through a study of comparative literature. In compiling this anthology, the author has provided a handy book for the introduction of ethnic studies in Malaysian educational instituitions.