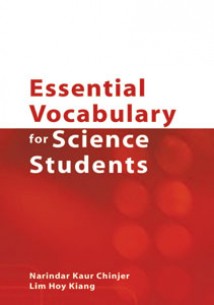 Essential Vocabulary for Science Students is an English language text for use in secondary schools, matriculation colleges, tertiary institutions and for self-study, to equip students to participate in basic science courses. It may also be useful for mathematics and science teachers in school. It is a course for familiarizing science students with words commonly used in science concepts which they have learnt in Bahasa Malaysia and which they now have to deal with in English. It is also for Science students, who although exposed to Mathematics and Science in English, do not have sufficient exposure to the vocabulary. As such, the exercises are written in such a way that students are exposed to basic words used in the contexts of describing appearances, measuring and talking about processes. These constitute the fundamentals of scientific discourse. The editors/writers, have been teaching English for Science at the University of Malaya for 18 years and 25 years respectively. The idea of an intensive vocabulary course was mooted because it was found that the students lacked the basic vocabulary to understand scientific texts, a situation which still prevails.