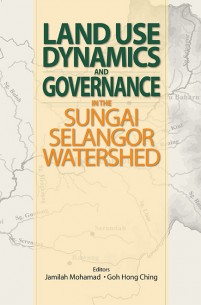 Land Use Dynamics and Governance in Sungai Selangor Watershed

Watersheds have been widely recognized as the best scale at which to govern
water. At the geographic scale of the watersheds, stakeholders are able to
make decisions on how to manage water resources in a setting more conducive
to participation. Through coordinated development and management of water, land, and
related resources, economic and social welfare can be optimized without compromising
sustainability of vital environmental systems. Sungai Selangor is an important water
resource for the state of Selangor. It is the major contributor in meeting water demand
to the Selangor State and Kuala Lumpur. Since early days, Sungai Selangor has played a
central role in the development of settlements in northern Selangor.
Theresearch described here is an attempt to understand the development forces
operating in the Sungai Selangor watershed. The approach taken is intentionally
multi-disciplinary, as it attempts to paint a broad brush picture of the current situation
within the Sungai Selangor watershed. Increasing pressures on land development is
a major factor that causes land use conflicts in the watershed. Spatial-environmental
governance should improve collaboration and connections between citizens and
decision-makers at the watershed scale. Many issues within the economic, social or
environmental realm necessitate an understanding of the spatial context within which
such forces operate.
The book is organized in ten chapters, each chapter being devoted towards
addressing particular issues considered prevalent or outstanding within the community
living within the watershed. Although the book has been written in an academic manner,
it should also appeal to the general public and students in higher education institutions
as it relates to topical issues. Beginner researchers may find that the discussion of various
issues within a location-specific context might spark off their interest to begin their own
research on particular aspects that appeal to their own area of expertise.